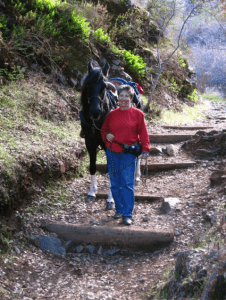 For two years I had Jerry take my horse, Lil Bit of Color, and ride her on the 10 day camping trip in the high country. Both years I brought a list of ‘fix its’ and things that needed tuning up. The list of improvements is long – however the following are the most significant and miraculous changes: Regulating her speed on the trail and getting her to stop tail gating (she’s a horse with a ‘big motor’), loading her in a trailer on command – just telling her “load up” – it used to take me 20 minutes to get her in!  The biggest correction of all was – About twice a year she used do a sudden and fast 180 when she spooked at an animal hiding in the bushes. The centrifugal force threw me off more than once before I could even realize what happened. Very scary. After her 10 day ride/training with Jerry – she has never done it again and it has now been 3 years!!! I have no idea how he trained her out of it – but it feels like a Miracle to me and gives me peace of mind on the trail!!